What are the Prerequisite Skills for AAC Devices?

In short, there are no prerequisite skills for AAC!  But let me explain why:

This is the most common question I get from parents and therapists working with non-verbal children who are considering augmented or alternative communication (AAC) systems or devices for a child.  There seem to be a pre-conceived notion that there are some pre-requisites for AAC devices that a child must have before they can be considered a candidate for an AAC device.

This is simply not true. In fact, AAC can actually help a child learn those skills more quickly.  The following examples will explain what I mean.  I will mention some common “prerequisite skills for AAC” that I hear about for AAC children and then I will explain why each one is not necessary before AAC can be initiated.

Or, if you’re looking for information about How to Teach AAC Devices to Children, Click Here! 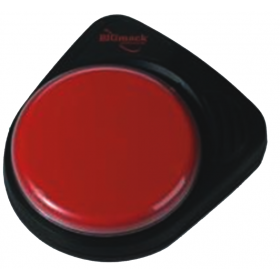 Prerequisite Skills for AAC Myth 1: The child must understand cause and effect

In fact, AAC can be used to teach cause and effect as well as communication at the same time.  There are devices called “big mack switches” by Mayer-Johnson that are a single large button that when pushed, will speak one pre-recorded message.  (Follow any of my affiliate links in this article and Mayer Johnson will give you free shipping!)

Let’s say the child really likes Cheerios.  You can record your voice on the button saying “cheerio” so that every time the button is pushed it will say that message.  Now, help the child move her hand to push the button.  When it says “Cheerio”, respond as though the child had just said the word: “Oh you want a Cheerio!  Sure!” and promptly give the child a cheerio.

Now, the child is beginning to learn that when she pushes the button, she gets a cheerio!  That’s teaching her cause and effect and how to use an AAC device.  It’s perfect! 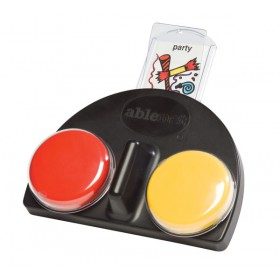 Prerequisite Myth 2: The Child Must Understand that a Picture Represents an Object

One common problem for non-verbal children is that they don’t understand that the picture of the cheerio in front of him represents that cheerio in your hand that he wants.  Fortunately, AAC devices can be used to teach your child that as well!

If you are using a one-button talker, like the one mentioned above, simply attach a picture of what your child is requesting to the button.  You can Velcro it on so that you can switch it out when your child wants something else.  This will help your child begin to associate that picture with what he requests.

Then, when the child pushes the wrong button, give him the thing he dislikes.  Once he figures out which button gets him which thing, start switching the pictures around so that he really has to look at the picture to make sure he requests the correct thing.  This will help him understand that the picture of the cheerio is what will get him what he wants. 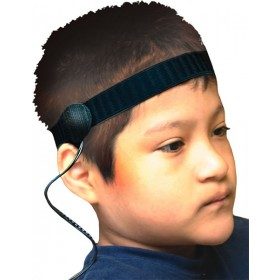 Prerequisite Myth 3: The Child Must Have Good Enough Motor Skills for AAC

Technology is an amazing thing and AAC companies have come up with tons of different ways for AAC users to access their devices, even if they do not have great motor skills.

For example, you can get a device with larger buttons or with physical dividers that will make it easier for the child to get her finger onto the correct button.  Or, your child could use a normal communication device but access it using a variety of easy-to-use switches, such as the following from Mayer Johnson:

Prerequisite Myth 4: The Child Must Understand Enough Language for AAC

There is nothing that says that children must have great language skills before they can start communicating!  You can start with one button and one word that the child is able to say using a communication device.  The child only needs to understand that they want the thing they get when they push that button.  The language skills will follow once he understands the effect that communicating has (it gets him what he wants!).

Think of it like this: we talk to children and use speech around them well before they are able to understand it or use it themselves.  That’s how they learn!  Similarly, we don’t have to wait until the child understands language before we start exposing him to an AAC device or system.

Prerequisite Myth 5: The Child Must Have Enough Interest in Communicating to Use AAC

This is one I commonly see in children with autism.  Parents or therapists will say “well, he never seems to want to communicate anything so I don’t think he would use a button to communicate either”.  For some children, that may be the case, but you never know until you try.  It is very likely that the child does not yet understand the power of communication.

Once you teach the child that pushing a button will get her something she wants, you may be surprised how much her interest in communication grows.  For many children, spoken words are much too difficult so verbal communication is not even an option.  If that is the only means of communication they have been exposed to, they will not be very interested in communicating since it is so difficult for them.

Prerequisite Myth 6: The Child Must Be Able to Keep Track of a Device

This is something that a lot of parents worry about when using AAC.  What if the child doesn’t have the device nearby when she needs it?  Then it won’t do us any good.  You’re right!

Mayer Johnson has come up with a great solution for this problem.  They have created the Go Talk Buttons which are small buttons that only cost $14.00 each.  These buttons contain one message but can be mounted anywhere in your house and would allow the child to request an object that is always near that location.

For example, you might put a button on the fridge (using the built-in magnet) that says “juice” when the child pushes it.  Since the child knows the juice is in the fridge, she will be likely to go there for the juice anyway and then there will be a communication device available for her.  You could also have one near the door that says “play outside” or  one near the bathroom that says “potty”.  This is a great way to introduce the child to AAC because many children will lead an adult over to what they want anyway.

Click Here to purchase this or any Mayer Johnson product on their website, you will also receive free shipping on your order by following my affiliate links!

I hope this helps you understand a little more about how AAC can be used with non-verbal and very young children.  Using AAC is such a wonderful way to get non-verbal or unintelligible children to start talking and there are so many options out there.  Many times, using an AAC device is just what is needed to give the child a jump-start to communicating and eventually get her talking!