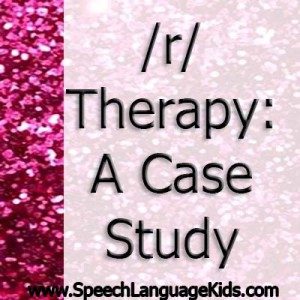 Ok everyone, I’m trying out a new style of post to see what you, my readers, think.  This will be a case study of a child that I have worked with and the r therapy I conducted with this child.  It will give you an idea of how to treat a specific difficulty from start to finish.  I’ve changed the personal information and a few other details to protect his privacy, but I promise not to leave out anything important to the treatment.  Let me know if this is helpful or if you like this type of post.  If it’s popular, I’ll write more!

This child, let’s call her Becky, is an 8-yr-old girl who had trouble saying /r/.  All other speech and language skills were normal but she just couldn’t seem able to get that /r/ figured out.  (That’s pretty common, /r/ is hard!)  She received one session of speech therapy with me at my clinic per week for about an hour.  The first 45 minutes was direct therapy with her and the last 15 minutes was reserved for training her parents how to perform the same therapy activities at home.  She practiced with her parents at home between our sessions.   I saw her for 13 sessions before she was ready to be dismissed.  We missed a few sessions here and there for various reasons so it took longer than 13 weeks.  Here are the steps that we followed through therapy:

When I work on /r/, I like to follow the ideas presented by Christine Ristuccia from “Say it Right” who talks about the “natural /r/”.  There are two different ways to pronounce the /r/ sound and everyone has one way that is natural for them, and the other way feels awkward.  If you force a child to say /r/ in the manner that is not their natural /r/, it will always sound awkward.  The two ways to pronounce /r/ are with the tongue cupped like a bowl (tongue tip pulls up and back) or curved like a mountain (tongue tip down and tongue bunches up in the back of the mouth).  Most children who have difficulty with /r/ have a few words that they can say with a good or very close /r/.  If you can find these words, you can watch the child’s mouth and find out which /r/ position he/she is using.  For Becky, I probed a lot of words until I finally found that the word “garden” had her best /r/ in it.  It wasn’t perfect, but it was close enough for me to figure out which /r/ position she was using.  When I looked in her mouth with a flashlight, I saw that she was using the mountain /r/ with her tongue tip down.  We practiced saying this /r/ as she said it in the word “garden” and talked about how her tongue felt and where everything was.  I wrote down instructions for her about how to find her good /r/.  For homework that week, I had her practice the word “garden” while focusing on that /r/ sound.  I had her say it slowly so she could feel where her tongue was.

The next step in /r/ therapy was to take the /r/ that Becky was good at, and push it into some other words.  To do this, I needed words that were very similar to the original successful word.  I thought about it like this: the /ar/ sound that is in “garden” is surrounded by a /k/ and a /d/.  The /g/ sound is very similar to /k/ so we started by replacing that sound first.  We practiced saying “gard” and “card”.  By focusing on making sure she followed the directions for producing a good /r/ that we had discussed in previous sessions, we were able to get the good /r/ in both of those words.  Then, we replaced the /d/ with a /t/ (as those sounds are very similar as well).  Now, we were able to practice “gard”, “card”, “gart”, and “cart”.  Ok, I know all of those aren’t real words but that’s not the point right now.  We ended our second session there and she was given homework to practice those four words for another week while focusing on that /r/ sound.  When she came back, that /ar/ sound was getting pretty solid so we started practicing it in other words that had the /ar/ sound.  We focused on making sure the /ar/ sounded and felt the same way in other words as it did in “garden”.  Since she had been practicing this /ar/ sound for two weeks now, this wasn’t too difficult.  She started saying words like “hard”, “arm”, “marble”, etc.  She practiced these for a week or two before moving on to the next step.

Now that Becky could produce /ar/ in single words accurately (or at least make an /r/ sound that was very, very close-/r/ takes a while to perfect), we moved on to trying other /r/ vowels.  The different /r/ vowels include “ar”, “or”, “ear”, “ire”, “er”, and “air”.  I probed words with each of these vowels and found which one was the most accurate and the easiest for her to produce.  Becky was able to produce “air” the easiest but we found that she did better when there was a hard consonant like “d” after the vowel.  We started with words that had a consonant after “air” and then moved to “air” sounds at the ends of words.  We did this for every vowel until she could do all of the vowels correctly.  This took several weeks.

Now we needed to work on /r/ at the beginning of words.  We did this in a similar manner as the last step except we started with a whole word with an /r/ in the middle and then slowly faded the first part of the word away.  So first she would say “earrrring”.  Then, she would mouth “ea” and just say “rrrring”, then she would just think the “ea” and only say “rrrrring”.

Becky and I practiced using her /r/ in more conversational speech.  First, I would have her make up single sentences about a picture while focusing on her /r/ sounds.  When she could do that, I had her tell me a story using the /r/ sounds.  I would give her gentle reminders along the way.  Once we got to this part, she moved very quickly.  I told Becky that we would be implementing a new idea called “talking time”.  Whenever it was “talking time”, I would place a picture in front of her that would remind her to use her good /r/.  If I heard a bad /r/, I would simply tap the picture so she knew that she needed to focus back on them again.  We did this during our therapy sessions and then I encouraged her parents to do the same at home for short (5-10 minute) sessions throughout the week.  After a few weeks of this, she was using her good /r/ in conversation most of the time and only needed occasional reminders to refocus when she was tired or excited.  She was dismissed from my services at this point.

Where to Find More Info:

This guide for R therapy, along with 38 others, is included in Ms. Carrie’s E-Book: Speech and Language Therapy Guide: Step-By-Step Speech Therapy Activities to Teach Speech and Language Skills At Home or In Therapy.  This guide includes detailed information on teaching various speech and language skills, including this one, along with worksheets, handouts, sample IEP goals, data collection, and video demonstrations.  For more information, click the button below: